Ok, so this item started it’s life as a whip like object.  Which is a reference to creations which have the appearance but not necessarily the mechanics or composition of a whip.  It was supposed to be a signal whip.  Which is a a type of whip that more often than not does not use a detachable fall to hold the popper.  The reason for this is that many styles of whips are expected to actually come in contact with objects.  Signal whips are intended to only create noise.  Since they do not hit anything the fall does not receive the normal wear & tear.  Thus, no need to replace it – hopefully ever.

I went back to it last year & redid one of the drops in the middle, adding some wrap in orange goat to even the flow of how the whip got narrower as it went towards the tip.  Also in the process reworked the tip of the whip before the core became exposed.  I also changed out the popper for a longer one.

The results were an a very snappy crack.

It became my favorite of the whips I make that crack.

On a whim as I was not feeling the normal whip making process – I took 16 lengths of dark green & gold painted goat leather – yes, I know I swore I was going to avoid the goat leather on my whips.  The lengths were pre-cuts that I got from springfield leather for like $2 for them, but that is out of stock and the same stuff is being sold in other quantities of 30 feet a roll at $4 until supplies run out.

The decorative sheath has turned out to be something of a disaster.  Due to the dyed leather not being cow, but rather goat – which is extremely stretchy material.  I had initially cut the 8 final lengths of the strands to 4.5′ long.  Then cut the other 7 strands to 4′ long.  This decision was because of the bad taper I had on the whip I am covering.  Normally, I’d have planned & computed or “mathed” the strand lengths better in order to find out how long each one was going to be – but once I realized I had goat strands, that I couldn’t pre-stretch out due to the paint/dye on the surface – I decided to just leave myself as much room as possible.  It turns out that on 4.5′ of goat, the variance between the quality allowed up to 6″ of difference in the length of the strands after being pulled.  Unfortunately, I had no control over which ones stretched and did not stretch as much.

Moral of the story – ALWAYS pre-stretch your leather strands before braiding them.

I’ll walk through what more of these photo’s are about – there’s a really interesting thing I stumbled by accident when my strands became uneven, due to the fact that I didn’t pre-stretch my strands (conscious choice due to the paint).  Also note, as I didn’t cut the strands myself I couldn’t get the perfect fit on the width of the strands for the circumference of the whip. 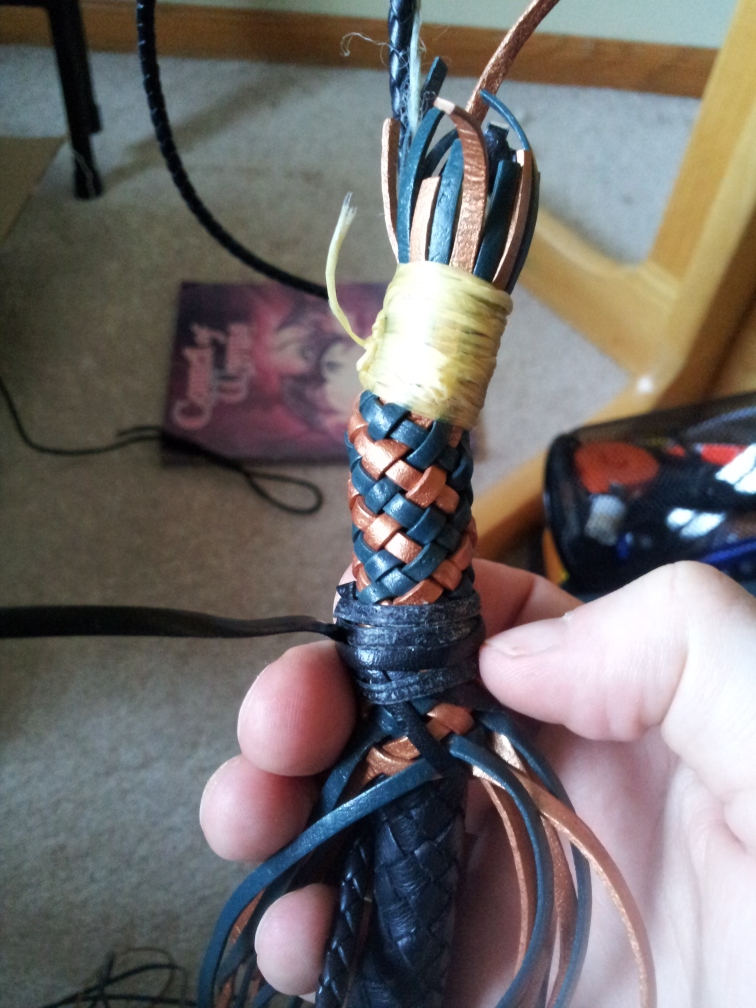 In this photo taken earlier in the process you can easily see the Over 1, Under 1 braiding transition to the standard whip maker’s herringbone braid.  The herringbone braid pattern is generally over half of the strands & under half of them for each side, for fine kangaroo whips it’s a standard that there’s 16 strands with 8 on each side.  That means the pattern would be Over 4, Under 4 to make the herringbone on a 16 strand whip.

What’s unusual here with with only 15 strands able to be fit on this whip, I have two of the dark green strands next to each on the right side of the braid. Ignore the parts hanging off the side of the right.  Count the parts just to the right of my thumb.

The #6 & #7 strands both being dark green makes an optical illusion that’s tough to see.  There’s actually braiding “drift” as I call it.  Where the pressure on the braid is uneven from my not having pulled with the same force on each side while doing it.  At this point in the braid it’s not very evident yet.  If you go back to up the top 3 photos, you can see that the braid drifts slightly to the right. 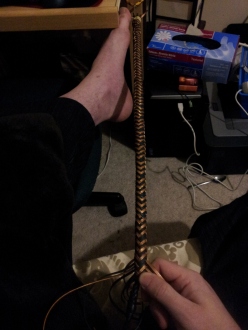 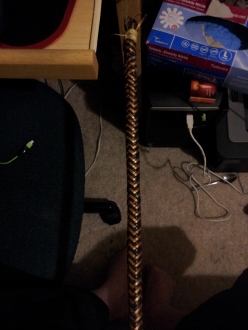 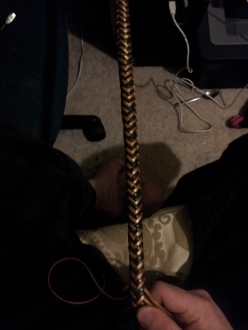 Now, it’s tough to see this one properly in the lighting I had, but you can click each photo for a bigger picture… there’s actually only 15 falls on this sheath.  Which means there are two green strands that end up next to each other.  It makes the whip appear crooked if you look closely.

The herringbone braid of 15 strands, at the first drop of a strand.

I drop two strands here.  As the strand coming from the right, around the back (gold) is too short to continue.  I took this chance to also drop a strand that would have been problematic later down in the braid too (dark green).

Below is the next drop …

Note, 5 strands covering the first drop now, but not pulled tight yet.  You can see here, despite the previous photo’s there is actually very little drift to the braid. Just above my thumb you can also see the drop for the zora whip I am covering.  Where my thumb is will be the next drop beginning immediately after the first drop is complete.

This is not standard & actually has the potential to weaken the whip sheath significantly.  I would not do this if this was in kangaroo.  Doing pairs or singles of drops one right after another might allow the sheath to pull free and have those strands become floating strays outside the whip body.  Normally,  you wait a pass or two, which is where every strand comes around at once.

The next photo is perspective change, using it even though its a bad shot as it shows the tightening being done.

Tightening held loosely to show the tape I was using temporarily over the drop.

I grabbed some silver tape to help keep the synthetic sinew from coming out of the braid.  The idea being that as you get near the end of the drop, you can pull the tape out from underneath the braid.  It does not always work, especially if you have a very tight braid of non-conditioned leather to help it slide.

The second drop pictured above.  I drop two here also, then covered them with the silver tape after I tie them off with artificial sinew.  I also discovered that the acrylic paint on the leather does not allow me to slide out the tape.  Which turns out to be ok, as you’ll see later.

While blurry, you can see the tightening coming along with a count of 5 strands on the left and 5 on the left.  The pattern is still asymmetrical with the left side being Over 3, Under 2 & the right side being Under 3, Over 2.

As you can see once I adjusted my focus, there is some major gaping holes that the tightening probably will not over come.  The reason for this is that I tried to change over a longer strand on the right in order to get 5 strands of good length on the left side.

Here’s the back of the same place.  You can see I on the right I fold over the dark green strand in order to bring it back where it would instead normally go around the front at that point.  The folded strand crease keeps the other strands from compensating for this as the fold is twice as tall with these strands.  In thinner kangaroo or kip hide this would not be nearly as visible & I have a feeling that with either of those types of leather, I’d be able to overlap the strands closer to have a smooth lay after rolling it and conditioning again.

Full length shot before I begin ending the whip like object …